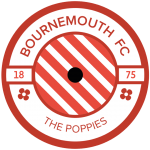 Tuesday night had a slight chill in the air at the MA Hart Stadium, Hurn Bridge Sports Club, but the action on the pitch soon warned us up. There was nothing much between the two sides, most of the play in the middle with some nice wide runs from both teams, crunching tackles especially in the second half and some nice passing manoeuvres. A half-time 0-0 scoreline was fair even though the Church had a few chances on goal only to be denied by keeper Sam Jones who had a great match for the visitors.

Martin Warren opened the scoring in the 57th minute from out of nothing to put the visitors ahead. The normal round of substitutions followed with it looking like a 1-nil victory for the Poppies. However Ron Frost in the dying minutes was sent to the sin bin, the Poppies pushed forward hard securing a late penalty kick witch Lewis Harvey converted in the 93rd minute to finish the match off.